Jack Williams thought in the National Schools Championships in Sheffield and came away with the Silver in the over 60kgs, years 6-7. Jack was very unlucky not to get Gold but a great result fighting larger fighters than himself having just sneaked into the top weight category at 61kgs! 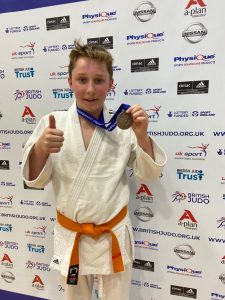 Josh Richter fought in the U66kgs for years 12-13. Josh won his first fight with an Ippon throw within 12 secs. His next fight was tougher against the eventual gold medalist. Despite throwing his opponent for Wazi-Ari Josh eventually lost out after being thrown himself a second time for Waza-Ari.