Very well done to Jack, Markos and Ethan for bringing home the medals from the Somerset Open!!

In out first outing to the Somerset Open held in Glastonbury on Sunday 11th February 2018, the 3 squad members attending returned with 4 gold medals between them!.

Jack won the Under 12’s U46kg, coming from behind in a hard fought contest. 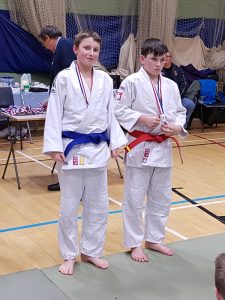 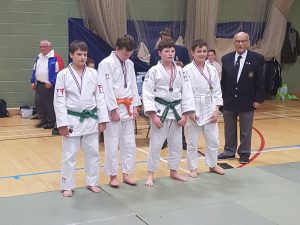 Ethan won both the under 16 U73kg and over 16 U66kg categories winning, his last fight with the biggest throw of the day! 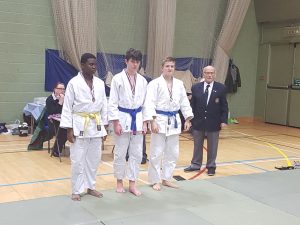 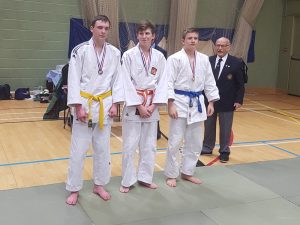 It was also great to see an old friend of the club, John Fuller as the guest of honour warding all the medals!

Three young fighters from the Bath Judo Club Squad attended the Somerset Open championships held at Glastonbury and returned with four gold medals. The first competitor to fight was Jack Williams from Kingswood prep school. He entered the under 12 years under 46 kilo group, Jack produced his best fighting skills to date to win his contests and the gold medal.

He was followed by club mate Markos Constantinides who was in the under 16 year and under 50 kilo group, Markos won every one of his fights with the maximum score of ‘ippon’ to take the gold medal.

This contest was followed by Ethan Hawtin a pupil from Kingswood senior school in the under 16 years and under 73 kilo class, Ethan won every contest well within the contest time with the maximum scores to take the gold medal. He then decided to enter the over 16 years group and was put into the under 66 kilo category where he again won all his fight with ease to take the gold medal.